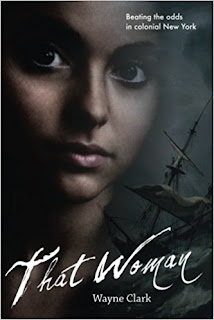 That Woman is an empowering story!
Sarah Da Silva and her brother Jacob are teenagers growing up in Bordeaux,
France in 1748. On the docks of France, they have been learning the merchantbusiness and helping their merchant father. That is, until they arekidnapped by a merchant ship bound for New York. In New York, they areseparated and sold to the highest bidders. There, they must work off theirindentures to pay for their passages. The sister and brother don't see eachother again for three years.Against all the odds in colonial New York, Sarah overcomes the hardships setupon her by her evil master and, after gaining her freedom, she prevailsthrough many of her own hardships. Sarah is a strong woman and thrivesthrough her sheer willpower, perseverance, and wits.Sarah and Jacob never see their father or France again, but their lives incolonial New York creates lasting friendships and hard-won personalsuccesses.Author Wayne Clark has mastered the art of writing an impressive andempowering story in That Woman. The story has a multitude of intriguingcharacters, it's riveting, a page turner, and wonderfully well written.

About the author:Award-winning author Wayne Clark was born in 1946 in Ottawa, Ont., but has called Montreal home since 1968. Woven through that time frame in no particular order have been interludes in Halifax, Toronto, Vancouver, Germany, Holland and Mexico.
By far the biggest slice in a pie chart of his career would be labelled journalism, including newspapers and magazines, as a reporter, editor and freelance writer. The other, smaller slices of the pie would also represent words in one form or another, in advertising as a copywriter and as a freelance translator. However, unquantifiable in a pie chart would be the slivers and shreds of time stolen over the years to write fiction.

Another great book by the author: he & She on Amazon:
https://goo.gl/8ftXiq
adult content
Posted by All About Children's Books at 16:17