Boy In The Magical Forest.

The boy, Ethan, is a real, live, nine-year old boy, and the forest is a real magical forest. This is the story of how Ethan became my number one fan.

Ethan and his mother visited my acreage awhile back, and the first thing we did was go searching for gnomes.

We didn't find any gnomes, but we did notice gnome poop in the horse field. We did find some odd tracks, which could possibly belong to gnomes. And then, we found bones---most probably dragon bones. Ethan took several of these bones home.

I showed Ethan and his mother where Petra and Snarls, and 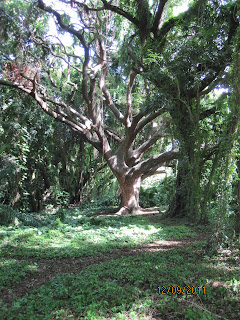 all the characters in The Pen Pieyu Adventures (adventure kids books) live in my magical forest.

Suddenly,  a wild gust of wind that twirled leaves to capture us in its vortex. Then a mighty dragon's roar---or maybe a bellowing cow---that sent us charging, in the other direction.. Then, as if by magic, everything went deadly silent.

That's when we came upon something I'd never seen before . . . 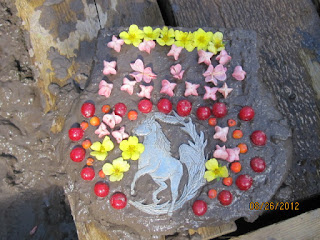 This unique and awe-inspiring mud pie made with flowers and berries, and a horse ornament that has been missing from my house for months. Was the pie magic? Was it made for us? An offering from my story-book characters? 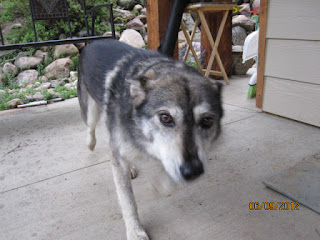 We were still pondering where the mud pie could have come from when this giant, snarling, wolf-creature rounded the corner. 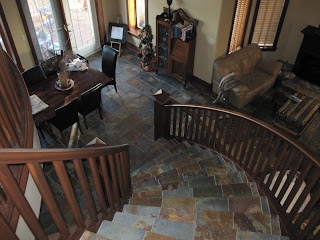 Since our day of adventure, Ethan has become my (or should I say, Petra's) number one fan. He writes to Petra regularly and Petra writes back. They often exchange gifts.

Ethan has his dragon bones mounted in a frame, although his mother wouldn't allow him to take home any gnome poop (this I don't understand since you don't come across gnome poop that often).

More on Ethan and Petra's blooming friendship in another blog.

Visit me and my fantasy kids books author's website at: http://www.dragonsbook.com

Posted by All About Children's Books at 07:31 4 comments:

Creativity In The Forest.

Creating, imagining, daydreaming, and writing in the forest is one of my favorite summer

pastimes. I imagine all sorts of
fantasy creatures and then, just as I nearly catch a glimpse of them, they run and hide behind the trees, giggling at me and my human eyes that can't quite focus on them.

The forest is my inspiration for my writing about the fantasy characters that are featured in my fantasy/adventure children's books series (book two coming soon).

As I imagine and daydream, the trees turn into faces and then materialize as full bodies. They start to laugh and dance and turn into  fantasy characters doing all sorts of things (of course this is just the wind shape-shifting my perception, but we're in creative mode, right?)

This creative process was how Snarls, the dragon, and Petra, the princess knight, were created several years ago--they are the characters in The Pen Peiyu Adventures. And still, years later when I  look at the same tree formations I first saw them in, they are still etched into the bark of their tree homes.

Through the years, and with lots of practice at creative imagining,
I've trained my human eyes to be more preceptive to the
forest and the fantasy characters that live within it. I see gnomes,
fairies, witches, princesses, giants, and of course, a dragon.

Creativity is a training process. The same process occurs when we stare into the clouds and make pictures.

I'm often asked at author visits how I get into creative mode. Well, creating characters within the barks and leaves of the trees is definitely a creative process for me. But what of those who don't have a forest?

-  Listen to music, especially classical music, to get your right brain stimulated--scientists have proven this.

-  Write and doodles with the opposite hand you usually write or doodle with.

-  Do an art project. I am an artist, so I paint while listening to music. This really stirs up my creative juices    and I can write wonderful things after a session of art.

- Meditate or deep breathing with your eyes closed for at least 20 minutes.

- Dress in a costume relevant to what you are writing about.

- Dance nude under the moonlight. Okay, this one I don't suggest if you live in a town or city. (Okay, I've never done this, but my writer friend swears by it).

Posted by All About Children's Books at 18:16 6 comments:

In the above sentences,  that and which are introducing what’s known as a restrictive relative clause.  This kind of clause contains essential information about the noun that comes before it. If you leave out this type of clause, the meaning of the sentence is affected, and it will probably not make much sense. Restrictive relative clauses can be introduced by that, which, whose, who, or whom.

A scroll  listing all of the dragons, which live in the forest, is in the royal  library.

The librarian handed her the scroll, which she took.

In the next two sentences, we look at the difference in the meaning of the sentences.

In the first sentence, we are saying all the scrolls are in the library. That they happen to be about dragons is extra information.
In the second sentence, we are saying that all the scrolls about dragons are in the library.
So think about what you need to say and portray in the sentences you write. Write the sentences well and everything will become much clearer for the reader.

Posted by All About Children's Books at 18:27 4 comments: