I don't usually do reprints of other people's articles, but this one was worth it. This article explains a lot about what is going on with those .99 cent ebooks.

Anyway, read on and see what you think.

| Posted: 10/24/2012 8:27 am EDT Updated: 10/24/2012 8:27 am EDT
http://www.huffingtonpost.com/2012/10/24/self-publishing-authors-killing-publishing-ebook_n_2008374.html
Video, 99c Ebooks, Self Publishing, Self Published, Cheap Ebooks, Ebook Price, Mainstream Publishing, Self Publishing Cheap, Books News
By Melissa Foster for indiereader.com
Self-published authors have created a devaluing of the written word, and, some of them are scrambling to see how low they can go to get noticed.
Let us list the ways: 99-cent price point for ebooks. Free ebooks via KDP Select program. Unedited work. Kindle giveaways to get attention and bulk up sales. And lastly, nasty reviews from other authors with the sole purpose of driving down customer ratings.
Why are indie authors selling their work so cheap? In short, mismanaged expectations. Many self-published authors hear about the outliers who earn hundreds of thousands of dollars, and they’ll do anything to try and reach that pinnacle. The plain fact is that most of them never will.
The Guardian recently reported that, “Despite the splash caused by self-publishing superstars such as Amanda Hocking and EL James, the average amount earned by DIY authors last year was just $10,000 (£6,375) – and half made less than $500.” That was backed up by a recent poll of authors who have 2 or less 99-cent ebooks on the market that revealed that 75% of authors are selling less than 100 ebooks per month at that rate, with 46% selling less than 10 ebooks per month.
Yes, there are 99-cent anomalies. A recent headline on GalleyCat reported that, “99-Cent Sale Sweeps Self-published Bestseller List”. Yes, Stephanie Bond did achieve bestseller status with three of her titles, all listed for 99 cents but what most indie authors fail to realize is that Stephanie was previously traditionally published and has a following in place. As a new author, that’s very difficult to match.
Although many do try, and not just by giving away books for less than a buck. Many indie authors are now relying on gimmicks to gain sales. They’re giving away Kindles and iPads in exchange for reviews and as raffles during sales promotions. Traditionally published authors aren’t stooping to these tactics. Why are indies? The short answer is that with over 1 million ebooks published each year, it’s difficult to make a mark.
The lesson may be that if indie authors don’t value their work, chances are no one else will either. Readers want, and deserve, quality books, and they’re used to paying for them. Think about it: pennies for pages didn’t exist before ebooks and self-publishing were viable.
Does this mean that self-published authors are killing the publishing industry? Yes, in a sense it does. What can be done about this devaluing of the written word? How can self-published authors change this scenario and help make self-publishing, as a whole, shine and earn as respectable of a reputation as traditional publishing?
Goals of self-published authors vary. Some dream of wealth, while others simply want to get their stories read. Some writers are now afraid to self-publish because of the reputation that self-published works are garnering.
If indie authors are going to make their mark, they’ll need to band together, put out reputable works, and stop looking for get-sales-quick gimmicks. The cycle of pricing books lower than the next author is a dangerous one. After all, there’s nowhere left to go after “free”.

In my opinion, there are a lot of pros and cons about self-publishing. And one of the pros is the independence you have over your own book. One of the cons being that a good writer with a good book can feel that they have to compete with lots of badly written books in the free or .99 cents category.

So, if you have a well written book and have self-published, I think that by taking the longer and more conventional road of marketing strategies, your book and your author's name will get out there in a more professional way, without giving your work away for next to nothing.

What do you think about the self-publishing industry?
Posted by All About Children's Books at 06:34 7 comments:

Dragons are just cool!
I have always loved dragons in books, movies, or where ever I happen to come across them. Hence, I write adventure/fantasy books for kids that has a dragon in the stories.
Snarls is the dragon. He is a secondary character in my series, The Pen Pieyu Adventure. 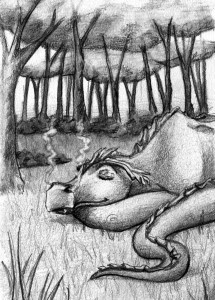 Snarls, being good.
When the reader is first introduced to Snarls, the howling dragon in the Forest of Doom, in book one, he is portrayed as many of his kinfolk: a howling, mean, fire-breathing, eye- brow singing menace.
But, alas, he is not really that way. He just got a bad rap due to the reputations of some other bad dragons in some other people’s books.
Once the reader gets to know Snarls and gives him a chance, just as Petra the main character of the series did, I’m pretty sure they will quite like him.
In fact, Petra and Snarls are the best of friends now. Which goes to show, if you treat a dragon right, good things can come of it.
Petra and Snarls go through the series having the best adventures. They do get into some zany, and somewhat scary, situations though. But  they make a great team and together they can get through anything. And Snarls, with his witty comments, makes the adventure stories that much more fun.
Here are some little known facts about Snarls:
1. He loves to cook.
2. His birthday is Oct 23rd.
3.He carries a resume.
4.Snarls lives in the Forest of Doom near Dragon Mountain. It sound scary at first, but you must know all the facts .His last name is Doom. So the Forest of Doom isn’t quite as scary once you know that the forest belongs to the Doom family and is not a forest full of doom.
5. He loves shiny, sliver things. Petra gave him her makeshift pots and pans armour in book one, and he polishes it daily.
6. His fire breathing doesn’t always work properly—when he get’s nervous, he lets out uncontrollable surges of fire, and when he is trying to be scary, he just huffs out wads of something that looks like shredded parchment.
7. He is somewhat of a scaredy-cat of a dragon, but if he feels he must protect Petra (Petra, the Princess Knight, usually never needs protecting), he summons up courage and shows his brave side.
Snarls has become quite the charismatic character in this series, and he has started to receive fan mail. Yes, fan mail to a dragon. I will post his first fan mail letter next week. Very, very interesting, indeed.
If you would like to know more about Snarls and the other characters in this adventure series, go here: http://www.dragonsbook.com/for-kids.html  There is a free coloring book to download also.
The Pen Pieyu Adventures is a four book adventure/fantasy series with zany characters and lots of humor. Book one, Sir Princess Petra was released January, 2012. Book 2, Sir Princess Petra’s Talent is forthcoming January, 2013. I am presently working on book three.
To read the reviews for Sir Princess Petra, go here: http://www.dragonsbook.com/reviews.html

Posted by All About Children's Books at 07:09 2 comments:

Fan Mail To A Dragon


Oh yah, he looks all innocent here, read on. Apparently, my dragon travels, and without my knowlege. This is an anonymous letter I received about some of Snarls's antics.

I love Snarls. But I think you should know some things about your dragon.

When Snarls visits me, he does nothing but agitate my kitties. He throws toys at them, not away from them so they can chase after the toys. Instead they must duck and scramble behind, well, just about anything, they are cats.

Why does he do this? Is this the way dragons play? Anyway, it's kind of rough!

He also insists on making dinner, something rarely seen here, even when Snarls visits. The fire department likes to show up when Snarls cooks and then we all go out to eat.

Snarls likes to take naps when here. He says the forest you insist he sleep in is too noisy with all the fairies and gnomes and other little people, who always have some shiny bell on them. He would rather sleep here, where he fits in none of the beds, even when placed end-to-end. And, again, the fire department likes to visit when Snarls is asleep, though they wake him up trying to put out the fire his snoring causes.

The fire department is here a lot when Snarls visits and they like to escort him out of the city as well. They must really like that stinker of a dragon. Who wouldn't with his strong smile, steely strength, and saturating stench (burning everything).

Snarls is not here as much as he used to be. He tells me book two keeps him rather busy. He is afraid that when the book is released, he will be much too busy to visit anyone. He is trying to tell me that anytime anyone cracks open book one or book two of the Pen Pieyu Adventures, he must go to work.

Does he really think he works whenever anyone reads one of your books?

P.S.  I have quite a large sum to pay off to the fire department. Um, could you help with that?


Dear Anonymous Dragon Friend,
Thank you for your consideration in informing me about Snarls. He is quite a character, isn’t he? And he does create enough havoc around here too, so don’t feel bad. I possibly could help you will your fire department bill if I knew who you were. Best wishes.
The Author, Diane M. Robinson.
http://www.dragonsbook.com

Has anybody else had visits from Snarls? Please let me know.

Posted by All About Children's Books at 06:28 8 comments:

From the back cover:  Queen Gobbledeegook has gone missing and it is up to Sir Nathan, the Hero of Mariskatania, to find her. Along the way he meets all sorts of odd folks, including pixies and wizards and a hulking creature named Mitzy that likes to knit.The land of Mariskatania is a colorful one, filled with bright Jubb Jubb Trees and fuzzy, blue Hobnobber Squirrels who spend all their time looking for a snack guaranteed to poison them.

This very clever and very silly adventure book is definitely one of my new favorites. The writing is crisp and exciting, and the totally out-of-the-box humor is amazing. I laughed, and I mean, I laughed a lot!

Sir Nathan is a great character: he is short, determined, somewhat scatter-brained, and he "hates evil" most of all. And although the "evils" don't turn out to be so evil after all, Sir Nathan tackles each evil situation with the utmost fierceness.

Princess Abbey, Tupolev, Sir Nathan's talking horse, and all of the other characters are quirky, interesting, and just plain fun.

The interior illustrations are black and white line drawings by Derek K. Gebler and are a wonderful addition to the story.

This book is imaginative and lively. A book that is easy and fun to read, and a book that any reluctant reader would definitely stick with. It is also a book that anybody, of any age, would thoroughly enjoy.