Posted by All About Children's Books at 07:41 2 comments:

It's an honor to receive the Very Inspiring Blogger Award.

This award was presented to me from, Jennie at, A Writers Journey http://welshjensblog.blogspot.ca/ Please visit her blog as she always has interested things to talk about.

Here are the rules of the award:
1.) Display the award logo on your blog.
2.) Link back to the person who nominated you.
3.) State 7 things about yourself.
4.) Nominate 15 bloggers for this award.
5.) Notify those bloggers of the nomination by linking to one of their specific posts so that they get notified by ping back

(Some of you have already received this award. I am nominating you because I believe you deserve it again).

Seven things about myself:

1. I write children's fantasy/adventure chapter books.
2. I live in a magical forest in central Alberta where gnome, faeries, dragons and such run wild.
3. I love animals--real and imaginary.
4.  I am a part-time art teacher.
5.  My first book, Sir Princess Petra, was rejected 27 times before finding a publisher.
6.  I  respect and  protect Mother Earth.
7. I bought a motorcycle last year, scared myself learning to ride, selling motorcycle, sticking to    horseback riding.

These are the great blogs I am nominating for this award:

Thank you to all of you who write and entertain.

Posted by All About Children's Books at 06:57 6 comments:

The Problem With Amazon Reviews 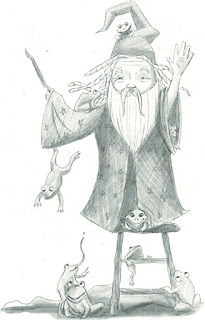 There is no magic involved in getting honest and legitimate reviews. It's called: the hard work of good writing on the author's part, and integrity on the reviewer's part.

Unfortunately some authors and reviewers don't play by the rules of integrity, especially on Amazon.

Author Michael Drakich has the same view as I do in regards to gathering honest and legit reviews. Micheal is talking about his
self-published books, but the information he provides has to do
with any and all published books.

The following is a re-post from Live Write Thrive

Today’s guest post is from Michael Drakich, and although he shares only 3 things, they’re detailed and insightful:

I’ve been asked to describe some things I’ve learned in the past year as a self-published author. The truth of them is they all involve the school of hard knocks. There is no easy path to success. Here are three major things with a number of other tidbits of advice mingled in.


The Gorilla in the Room

When it comes to the indie publishing world, Amazon is the 900-pound gorilla. Self published authors have no choice but to accede to the whims of this monster. Because most self-pubs rely on ebook sales only and Amazon has the giant share of that market, they are forced to compete within that marketplace.

What does this mean? On Kindle Select the number of free novels every single day of the week (over 5,000 the day of this post) makes trying to sell your product a challenge. I mean, why should a book buyer look at your reasonably priced product, most ranging from $.99 to $4.99, when they can get a competitor for $0.00!

But it doesn’t end there. Let’s say a buyer decides to actually shop because he wants to search for quality. So they search a category and the default search is by popularity. Well, unless you can generate a lot of sales quickly, your book will be so many pages in, the buyer will never look that far.

Let’s say they change the search to average customer review. Again, unless you have had any luck garnering reviews in a massive amount, your book will be buried deep. What is purportedly happening is authors are buying five-star reviews by the hundreds to give them a high rating. Amazon’s algorithm’s kick in and, voila, a top-rated book. No effective system is in place to stop such abuse.

So how do self-published authors get their books found on Amazon? The simple answer is—they don’t. As long as Amazon is happy with the current system, they will have no motivation to change it. After all, buyers want to find the most popular or the highest rated. Why would they introduce anything that would be counterproductive to that?

The 900-pound gorilla is sitting and you can’t move him.

Posted by All About Children's Books at 06:00 5 comments:

There are so many rules on how to use a comma and how not use a comma that it can be mind boggling, even for experienced writers.

I have a lot of fights with commas. And how I usually win comes down to common sense--how does that particular sentence read, sound, portray what I am trying to say.

I uses as few commas as necessary because I find that the liberal use of commas can distract the reader from the story.

Comma usage is often a question of personal writing style. Some writer use them liberally, while others use them sparingly. Modern North American style guides now recommend using fewer commas rather than more.

For instance, the use of a comma before the "and" in a series is usually optional, but most writer choose to eliminate it as long as there is no chance of misreading the sentence:

Before going home, we went around the mountain, played with the dragon, swam in the lake and ate our cookies. (no comma needed before the"and" if you ate your cookies while you were in the lake).

Do not use a comma to set off words and phrases (especially introductory ones) that are only slightly parenthetical:

Wrong:  After dinner, we all played dragon tag.

Right:     After dinner we all played  dragon tag.

Wrong:  The dragon's ear, on the left side of his head, was curly.

Right:     The dragon's ear on the left side of his head was curly.

Example:  The faeries of Dalorme, who for centuries had lived in caves with dirt floors and rock walls, were unfamiliar with the protocol of living in a palace.

You can also use two other punctuation marks to set off non-restrictive elements: parentheses and em-dashes.

Enclosing a non-restrictive element in parentheses reduces the importance of that information.

Example:  The dragons' fire breathing skills (with one exception) were not good.

Enclosing a non-restrictive element within em-dashes has the opposite effect: it emphasizes the material.

Example:  The dragons' fire breathing skills---with one exception---were not good.

An  what about those very troublesome words:  however, therefore, and indeed.


A great place to freshen up your grammar at Grammar Girl:
http://grammar.quickanddirtytips.com/

And sincerely, good luck with your comma woes.