The Adventures of Tomato and Pea--Book Review. 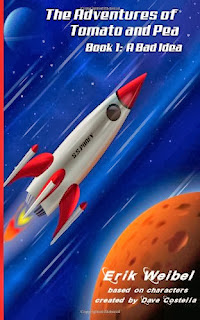 The Adventures of Tomato and Pea
Book 1: A Bad Idea

Back Cover:  For years the evil villain Wintergreen has tried to destroy super crime-stopper, Tomato, and his sidekick, Pea, and take over planet Oarg.  In a plan gone wrong, Wintergreen traps himself along with his arch-nemesis in a runaway rocket ship that crashes on a strange planet called “EAR-TH”.  Now these perennial enemies must learn to work together to survive the dangers on this strange world.  Hungry birds, enormous snakes and the giant inhabitants of EAR-TH stand between this brawling bunch of aliens and finding a way home.
About the Story:  Super-hero/O.L.E. agent Tomato wins an all-inclusive space cruise for himself and three companions, and asks his best friends: Pea, his sidekick; Skew, a cook; and Poppy Lobster, a mailman aboard the S.S. Poofy.  Unbeknown to Tomato , his nemesis, Wintergreen,  has set the whole thing up with the intention of sending Tomato and his gang into a black hole from which they can never return.  Things go wrong when Wintergreen and his crew get trapped in the S.S. Poofy, and everybody is hurled into space. The ship is out of control and soon on a crash course with the unknown planet called EAR-TH--a place called O-HI-O  to be exact.
What I thought: This is a wonderful adventure written by an eleven-year-old who is also a book reviewer at
http://thiskidreviewsbooks.com/  Who better to write a middle grade book than someone who reads a bazillion middle grade books?
Erik's debut chapter book has imaginative and quirky characters who are a ton of fun to go on this adventure with. Most of the characters are 3 - 4 inch Smidges from the planet of Oarg, and some 10 inch Wardoes who are aliens trying to destroy Oarg. The villain, Wintergreen, is a blueish-green color Smidge, who wasn't always bad and at one time wanted to be a ballerina (that's hilarious!). The super-hero, Tomato, also a Smidge, is just plain likable and good--he even refuses to leave his nemesis behind when Wintergreen becomes trapped by a giant snake. Now, that's a super-hero!
All the characters are very well developed and convincing through their actions and reactions. The dialogue continuously moves the story forward and reveals more and more about the characters through 'showing' as the adventure progresses.
The theme of this adventure is very positive: good Smidges and bad Smidges must learn to co-operate and get along if they are to survive after their crash to EAR-TH.
The plotting is sound, creative, and original making this big adventure a page turner. I loved the humor, and the whole tone of the book.
From a writing tutor's point of view, I think the author has done a great job overall.  My only suggestion would be to intertwine the prologue into the story instead of having it separate at the beginning.
From a children book writer's point of view, I think this is an original, quirky, and a well written adventure . Thank you for a great adventure, Erik!
About Erik Weibel
Eleven-year old Erik plans to take over the world. Right now he's a bit too young, so he is spending time as a sixth grade student, book reviewer blogger, and a hopeful writer. Visit Erik's incredible book review site here: This Kid Reviews Books
Erik’s book is available at Amazon US, Amazon UK, and Amazon Canada, plusCreateSpace.
Blog:  http://thiskidreviewsbooks.com/
Twitter:  https://twitter.com/ThisKid_Erik
Facebook:  https://www.facebook.com/Thiskidreviewsbooks

Posted by All About Children's Books at 10:47