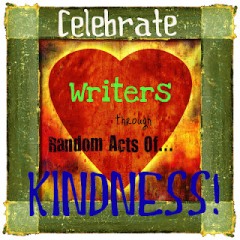 My friend, Sue, at www.kid-lit-reviews.com gave me a RAOK Shout last week. I would like to return the RAOK back to her.
Many months ago, while I was searching for people to do reviews on book one of Sir Princess Petra, I came across Sue at Kid Lit Reviews.  First of all, I'd like it to be known that getting reviewers to do a review is not such an easy task. Many emails are sent out, and only a handful reply and agree to do the review. Sue was one of those reviewers.
Sue is a fair and honest reviewer that speaks her mind. That is exactly what a writer wants from the reviewer. Getting reviews on my book was somewhat of a scary venture, but I believed I had done the best I could do in writing the book, and hopefully the reviewer would see that also. Sue gave me a 5 star review, Whew!
For more of my reviews, go to:http://www.dianemaerobinson.tateauthor.com
But that is not why we became very good friends. Through the months, we started e-mailing back and forth, talking books, publishing and getting to know each other through each others goofy sense of humor. Sue is also working on her own book.
Now, we are setting up a blog site together called Two Girl Lit (more on this when we're up and running).  Well, Sue is setting it up because I am nearly a computer idiot. I say nearly because several months ago I was a complete computer idiot. Sue has helped me through all kinds of  computer stuff; setting up a blog site, posting pictures, terminology. The list goes on.
Thank you, Sue, for all that you've done for me! You are a great mentor to me. And I'm so glad we are friends.
This is the post Sue had on her blog last week.
The other person who has been instrumental in this blog was once a writer needing a review.  She had a middle grade book about a girl wanting a non-traditional career and parents who were against the whole idea.  The girl kept pressing until she was given a shot at, what the parents believed, she would not succeed.  She did.  That girl was Princess Petra who is now known by the moniker Sir Princess Petra, Royal Knight.
The author of that interestingly funny book somehow became a friend–a good friend.  She not only encourages me, as she does with nearly every post (which means when she has not grabbed pencil and pad and locked the door behind her for more writing time.)  I get emails practically every day asking about my own writing and badgering me to write that book “NOW!“  I will.
Her Sir Princess Petra was a hit and now a series.  The book has garnered an award, which I would love to tell you the name of, but I have no idea yet.  Publishers want it hush-hush for now.  It might have to do with the second book of the Pen Pieyu Series which is close to launch day.

Thank you Diane Mae Robinson, for driving me . . . nuts.  Without all of your encouragement I would not be outlining a book–my book.  I may need some of Erik’s help, too. He is on his second book, but you are now on your third.  The two of  you are hard to keep up with.

Posted by All About Children's Books at 06:51