I don't usually review adult books, but I am making an exception to my own rule because this is a great collection of short stories that deserves attention. 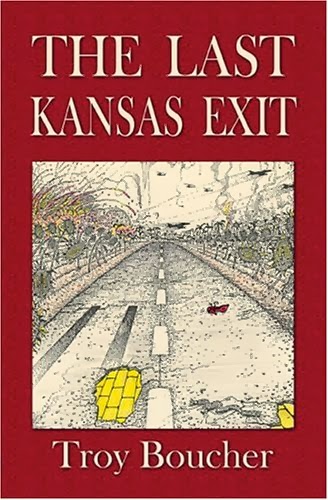 Back cover: The Last Kansas Exit is about life in the heart of the country, where the weather is as unpredictable and changing as the people. These stories reflect much the same Kansas that John Stewart Curry saw and reproduced in his artwork. If there is an adhesive that holds them together it is the setting and the people who have been shaped by a strong sense of place and who become stronger because of where they are. These stories are about the people who, regardless of their age or circumstances, are doing their best to understand love, friendship, and the world they live in.

About the book: This short story collection contains ten short stories. The first three stories are a trilogy: Deep Water, Wildwood Flower, Semper Fi. The trilogy, as well as three other stories in this collection (Scrapbook, Pocket Money, Light Harvest) have been published in literary journals prior to their publication in this collection. Pocket Money won 1st place in the Bob Gross Fiction Contest sponsored by Woodley Press. The four other short stories in the collection are entitled: Jumping, Forth of July, Eli's Coming, and Father's Day. The diversity of the story topics vary widely: vampires, boxing, prejudice, and dementia in the epistolary form of Scrapbook, to name a few

What I thought: First of all, I am a fan of well written short stories. Secondly, I am a fan of unique, creative stories.This collection is all that and more. Each story evoked different emotions from me as each story has it's own tone and style. I was immediately drawn in by the excellent writing, vivid characters, and the original story line of each story. The author does a great job with creating metaphors that linger in the mind of the reader--I love great metaphors. The humor intertwined within the stories is exceptionally well done; bringing home the point that even in some of the more serious issues of life, there is humor to be found. Writing well paced humor is not an easy feat, and I commend the author for doing this with precision. I Highly recommend this book.
About the author: Troy Boucher grew up in a small western Oklahoma town on what was once a large Cheyenne-Arapaho reservation. As a child he spent time watching western movies on Saturday afternoons, reading, and listening to the stories of his grandfather and other in the community. Most of his adult life has been spent teaching writing and American literature in a small private college in Kansas. The author has also published a well received novel entitled, Prince of the Plains.

Prince of the Plains available: 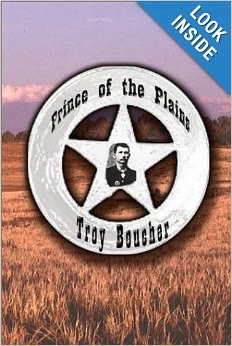 Of all the men who rode with Billy the Kid, one of the least well-know is Henry Newton Brown. Brown broke with Billy the Kid and for a time served as an assistant marshal of Tascaso, Texas. Restless and looking for a better life, Brown ended up in Caldwell, Kansas in where he became an assistant marshal and eventually, after Bat Carr was fired, he became the marshal, of the cowtown known as the Border Queen. Sure that his past had been safely left in New Mexico, he began to settle-in as a respected citizen of Caldwell. He was honored with the gift of an engraved Winchester as a token of the town?
Note: This is a book of fiction based on the life of Henry Newton Brown.
Visit my author's website at: http://www.dragonsbook.com

Posted by All About Children's Books at 13:23