Now and again, I post book reviews about noteworthy adult novels that I've read and enjoyed. This is one such book. 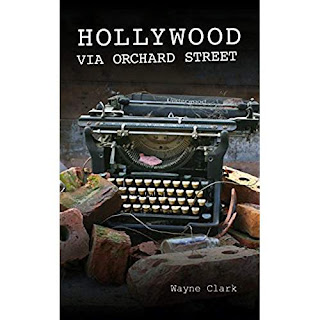 Deciding that the hopelessness he sees around him on New York’s squalid Lower East Side during the Great Depression isn’t for him, a young man invents an alter ego with the chutzpah he hopes will make a name for himself. In the process he accidentally ignites a war between the Irish mob and a Chinese tong, learns to drink and finds love for the first time. Will he and his alter ego ever reunite? They will have to if he doesn’t want to lose the love of a beautiful Broadway actress.

"The goal,” young Charles Czerny scribbled in pencil, “was to become someone else.”—The opening line of Hollywood via Orchard Street instantly sets the pace of this story about a young man’s ambitions to leave the lackluster life of Orchard Street, to do something more with his life than to sell newspapers on the street.

Charles Czerny is a meek young man, a grade-seven dropout who can memorize poetry. He needs to create a persona that is tougher and bolder, a persona that will get him out of the depressing neighborhood he lives in. Hence, Bulldog is born.

Bulldog creates a different life for himself by inadvertently hooking up with the mob. The mob life connects him with important people who help shape Bulldog into a respected newspaper writer of mob news that eventually leads to his connections writing for Hollywood. The mob life, also, connects him to the most important woman in his life, Miss Shantell Vox—the ex moll of the New York mob boss, the woman he saves and the woman he falls in love with.

The characters of this story are so captivating and fully rounded out as the story progresses that the reader can’t help but to become a part of their lives. The writing is of the highest caliber. This is a gangster story, a love story, and a story of achievement with some humor thrown in for good measure. You won’t want to put this book down. Highly recommended!

Award-winning author Wayne Clark was born in 1946 in Ottawa, Ont., but has called Montreal home since 1968. Woven through that time frame in no particular order have been interludes in Halifax, Toronto, Vancouver, Germany, Holland and Mexico.

By far the biggest slice in a pie chart of his career would be labelled journalism, including newspapers and magazines, as a reporter, editor and freelance writer. The other, smaller slices of the pie would also represent words in one form or another, in advertising as a copywriter and as a freelance translator. However, unquantifiable in a pie chart would be the slivers and shreds of time stolen over the years to write fiction.

Visit the author's Amazon page to view all of his books:  https://www.amazon.com/default/e/B00G3S9GKS/
Posted by All About Children's Books at 13:40