Mini Grammar Lesson - "Are" and "Is" in Verb Agreement

“Are” and “Is” in Verb Agreement 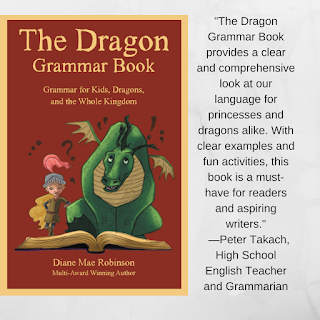 Copyright 2013
The Dragon Grammar Book -
Grammar for Kids, Dragon,
and the Whole Kingdom

"Are" and "Is" in
Verb Agreement
Chapter 2

Are you sure this is right? Are and is can get confusing when we’re not sure if the thing we’re talking about is a single thing or more than one thing.

Look at the noun or subject of the sentence as a whole to decide if it’s singular or plural. Single noun – is. Plural noun – are.

In the following example sentences, the noun or subject of the sentence is underlined.

The witch’s pot of onions is simmering over the fire. (Pot is a single thing that happens to be full of onions; “pot of onions” is a single subject and requires the single verb is.)

Petra’s favorite type of book is adventures. (The single noun phrase “type of book” requires the single verb is.)

Fantasies are my favorite type of book. (The plural noun Fantasies requires the plural verb are.)

Review: when a subject is made up of two elements joined by “or” or “nor,” the verb is singular if both elements are singular. If one of the elements is plural, the verb becomes plural.

Neither the king nor the prince is responsible for the smelly mess.

As noted earlier, there is a rule that many writers follow called the proximity rule. The proximity rules states that the noun nearest the verb governs it. In my studies of grammar, I believe the proximity rule to be less common, but both rules are correct. It is more important to be consistent with using either rule.

The subject in a sentence will come before a phrase beginning with of.

A coat of many colors is a nice thing to wear. (Coat comes before of and is a single subject requiring the single verb is.)

Usually, a plural verb is used with two or more subjects when they are connected by and.

A dragon and a crocodile are my only pets.

But not if the and is part of a single subject phrase.

Playing Dungeons and Dragons is fun.

Singing, as well as dancing, is the terrifying part of the knight exam.

The magicians, along with the councilman, are writing new rules.

When sentences begin with here or there, the subject follows the verb.

There is one waltz the knights have to perform.

Here are your dancing shoes.

Subject-verb agreement comes down to figuring out if the subject is plural or singular.

The rules of the kingdom are listed in the royal rule book. (Plural subject requires are.)

The economics of the kingdom are silly. (Plural subject requires are.)

The same rules apply to does and do (does being singular and do being plural).

What do the dragon and I have in common? (Plural subject “dragon and I” requires do.)

Queen Mabel is the only one of the royals who does follow the rules. (Single subject requires does.)

Use does for the pronouns, he, she, and it. Use do for the other subject pronouns I, you, we, and they.

I do my singing in the morning. He does his singing at night.

The rules for are, is, do, and does are the same as for all verbs to be in agreement with their subject. Remember that the verb is not always pertaining to the noun it is beside but pertaining to the subject of the sentence.

For more information about the author's multi-award winning dragon books for children:
https://www.dragonsbook.com

Posted by All About Children's Books at 09:41