Dangling Participles. Sounds scary but they really aren't. It's more a matter of common sense and a couple of rules that will correct this pesky problem.

In the sentence below, the modifying clause (Rushing to catch the dragon) contains a participle (rushing). The participle is said to be dangling because the subject of the main clause (Sue's sword) is not the thing modified by the initial modifying clause. It was not Sue's sword that was rushing.

[wrong] Rushing to catch the dragon, Sue's sword fell out of its sheath.

[right] Rushing to catch the dragon, Sue realized her sword fell out of its sheath.


And in this example, the modifying clause (Running after the dragon) is dangling because it is modifying the arrows. The arrows are not running, Sue is:

[wrong] Running after the dragon, the arrows fell and broke.

[right] Running after the dragon, Sue felt the arrows fall and watched as they broke.

An adjective must modify some noun.

[right] While still holding the dragon food, Sue ran from the dragon.

Now the sentences sound like Sue is the culprit, running away with all the dragon food. Why? We don't know. I think, sometimes, Sue just likes to tease the dragons. 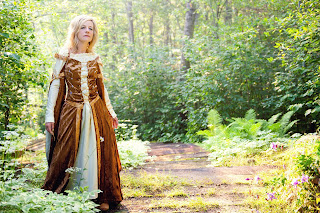 Posted by All About Children's Books at 17:04